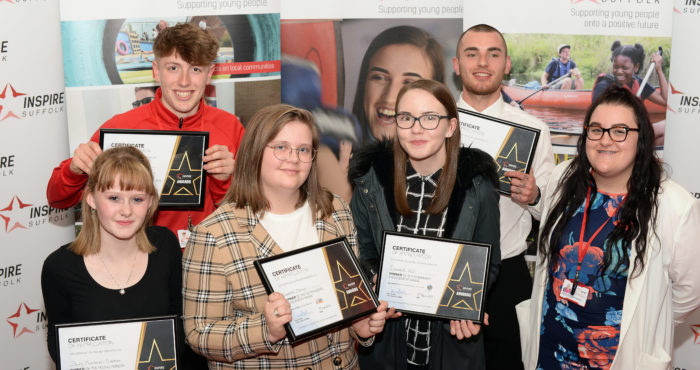 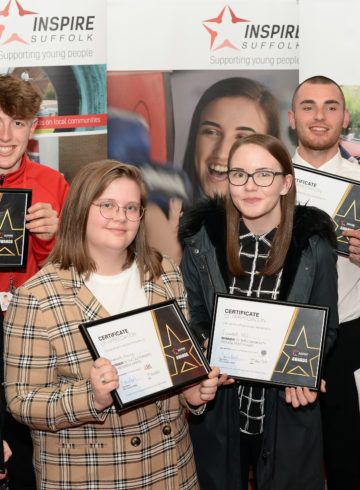 Last night, 9th April, we hosted our second awards ceremony celebrating the successes and accomplishments of both our students and staff throughout 2018.

As a charity, we work to support young people onto a positive future through our personal development courses guiding them into employment, education, volunteering or further training. The aim of the evening was to recognise students who had completed these programmes and overcame barriers they faced including mental health issues and struggles with education, as well as the hard work and dedication of our staff, who deliver our programmes and contribute to the running of the charity.

“We are extremely proud to be able to recognise and shine a light on a number of inspirational stories of our students and staff at this event. All of our nominees showed resilience, hard work, determination and success, which really does emphasise the importance of the work that we’re doing across the county. Thank you to our supporters and sponsors of the evening.”

Thank you to all of our award sponsors listed below with each of the awards. Also a big thank you to Reece Productions for supporting our sound and lighting, Emma’s Florist for the table decorations, Suffolk Digital for the printing and Coconut & Lime for the canapes. 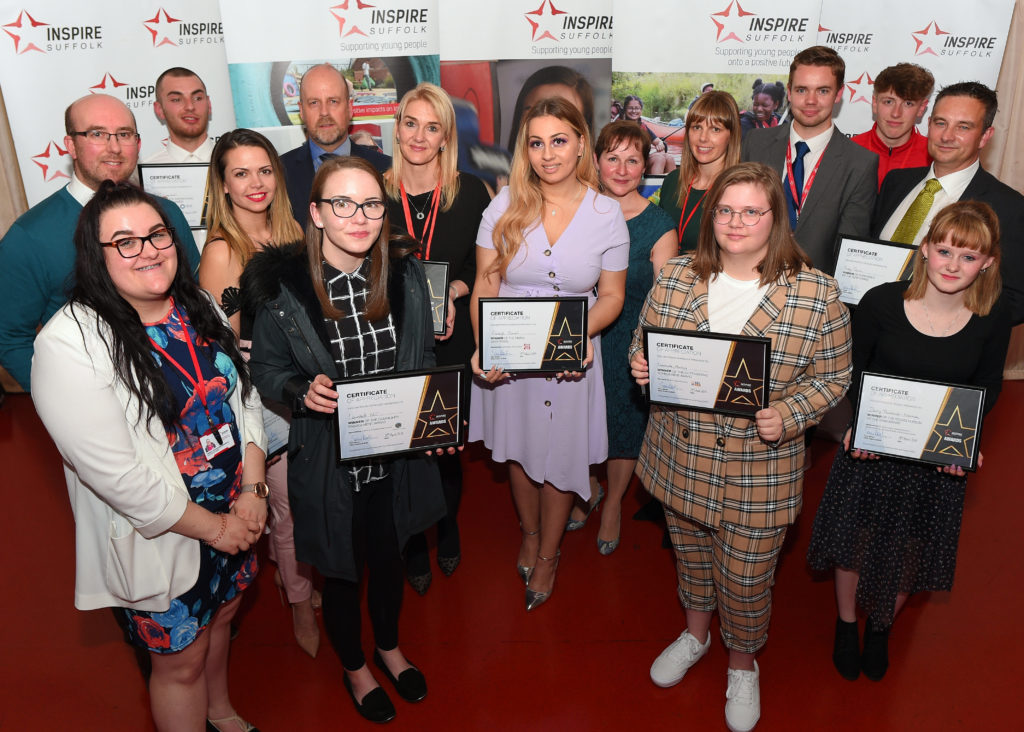 The Outstanding Achievement Award sponsored by EDF Energy (Sizewell C) went to Annabelle Morling who prior to meeting Inspire had attended college for just one day when her anxiety got the better of her. She experienced panic attacks every day and wouldn’t leave the house alone. Annabelle joined our Prince’s Trust Team programme and started to come out of her shell. She is now pursuing her passion of photography and film at a small college on a Digital Media course and is now applying for University courses. 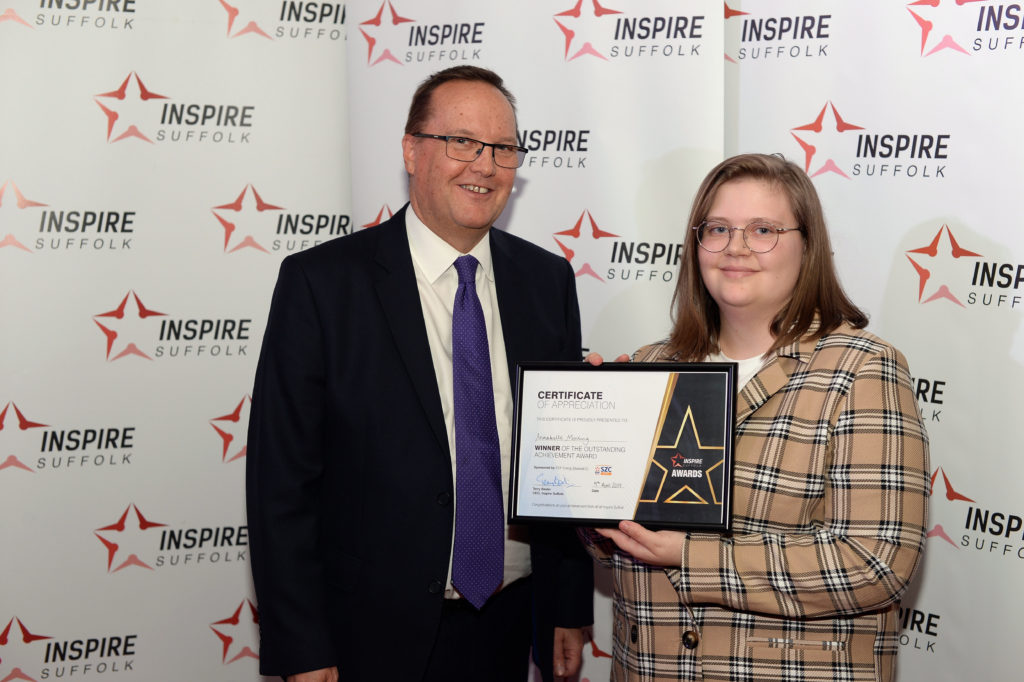 They ran craft activities with the children creating a colourful art canvas to be displayed in the ward and ran fun games to brighten the patient’s days. The group also delivered care packages including toys, toiletries and home comforts which they had raised funds for.

This group took part in our NCS programme last Summer. Our next NCS programme will be in Summer 2019 for 15-17 year olds and you can sign up now here. 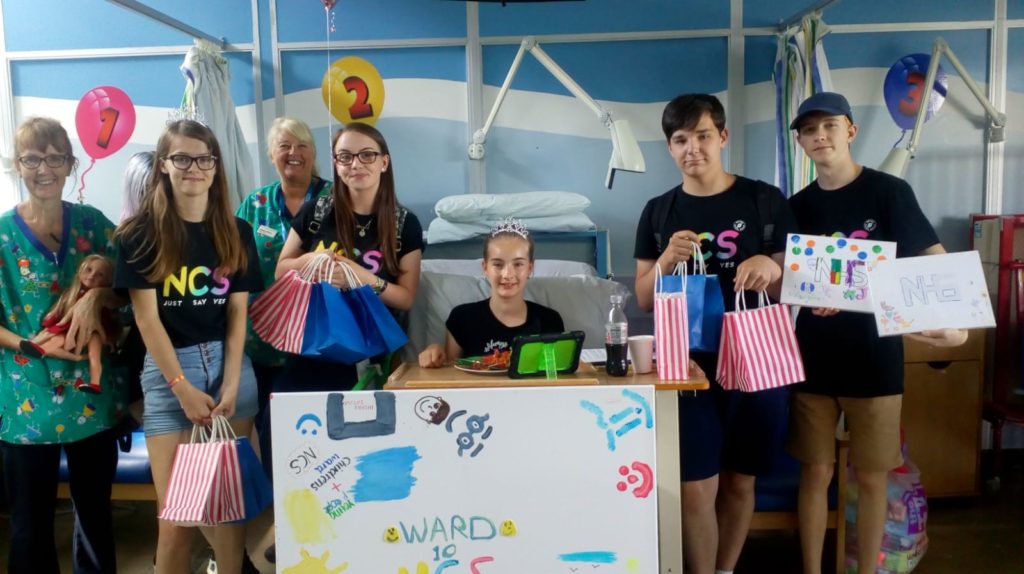 The Apprentice of the Year Award sponsored by Seckford Foundation was won by sports coaching apprentice Kieren Bedford who is a valued member of our sports coaching team. Kieren takes pride in the coaching sessions he delivers to local children always trying to get the very best out of them. He was also Highly Commended for the Suffolk FA Coach of the Year for his external football coaching last year. 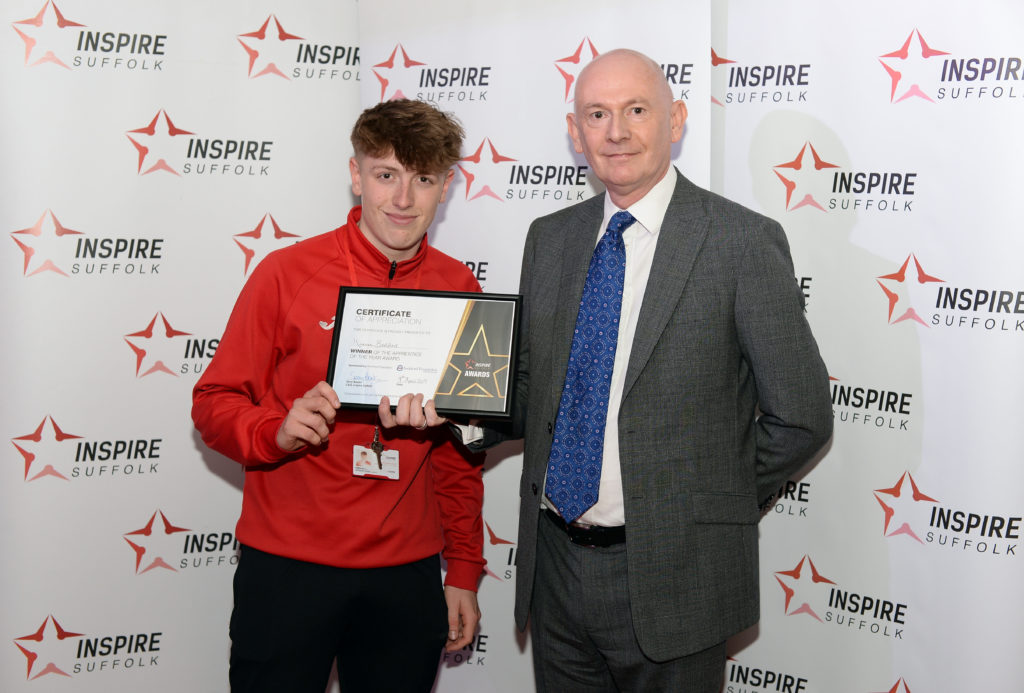 Dean Lambert won the Inspirational Young Person Award sponsored by Opus People Solutions for throwing himself into our Prince’s Trust Team programme and securing himself a full-time job at Hemisphere Freight through his professionalism on his work experience placement. Prior to engaging with Inspire, Dean was struggling to integrate back into society after being on the wrong side of the law. 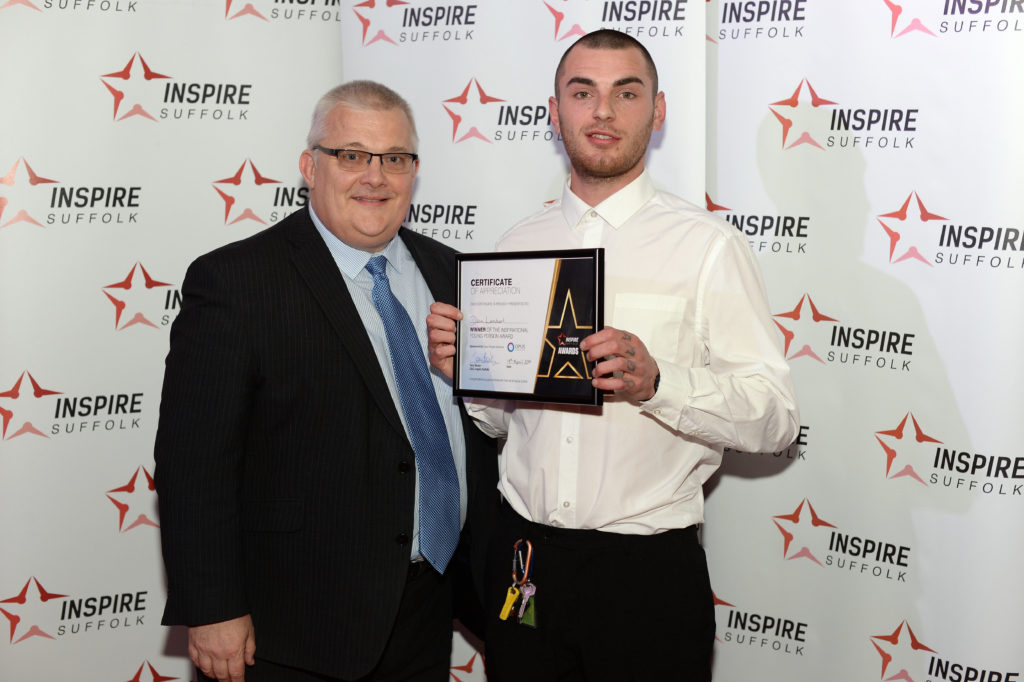 Daisy Theobald-Newman received the Young Person of the Year Award sponsored by Cllr Gordon Jones. She had moved out of home when she was just 16 and due to struggles with her mental health, left school with no qualifications and no aspirations.

Daisy joined our Prince’s Trust Team programme and secured herself a job at Pizza Express whilst on the course and is now working at another restaurant. Daisy is also taking her Maths and English qualifications to achieve what she was unable to at school. She says her confidence has “gone through the roof and rocketed!” 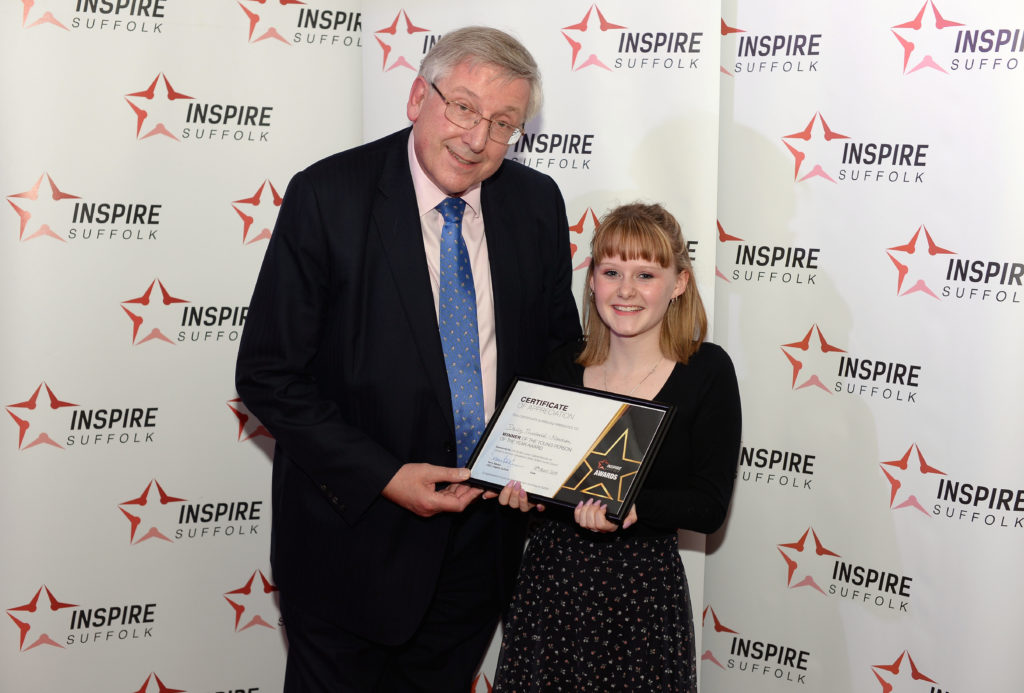 Next up are our staff award winners…

The Rising Star Award sponsored by Sandy Martin, MP for Ipswich went to Ashleigh Hurrell who joined us as a Youth Support Worker and through her hard work and dedication is now the Programme Coordinator & Lead Tutor for our newest initiative, the Prince’s Trust ‘Achieve’ programme. Ashleigh has approached this challenge head-on and has greatly improved the quality of support provided for young people throughout the charity. 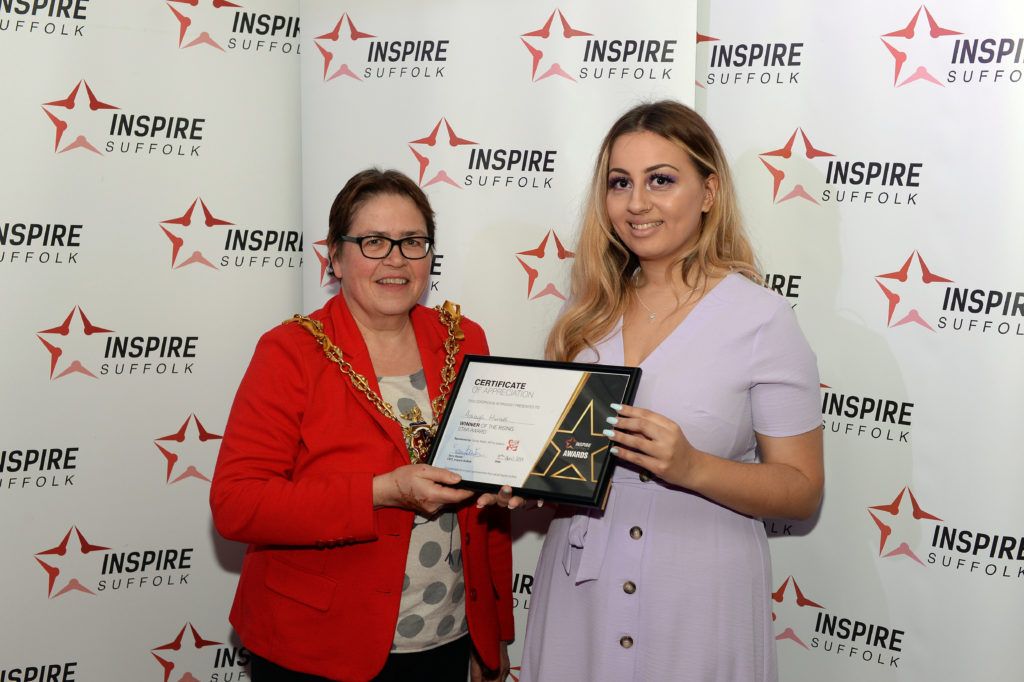 The Finance Team received the Team of the Year Award sponsored by Suffolk New College going the extra mile to ensure their job is done to the best possible standard. Their commitment and dedication were highly acknowledged, as well as their support and contribution to the success of the whole charity. 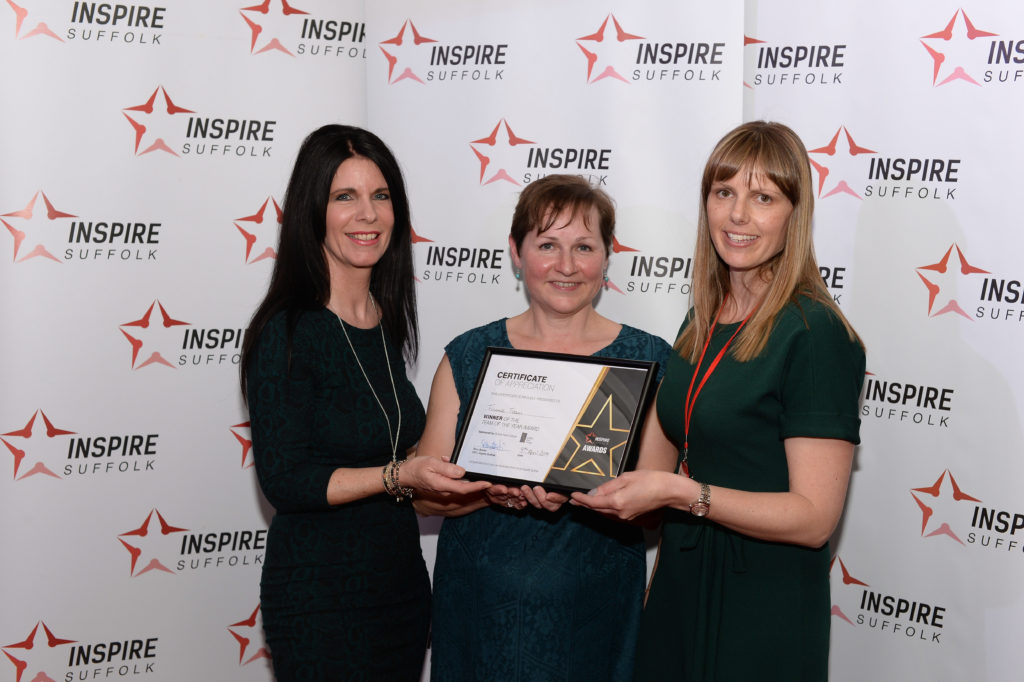 Jacob Charles, Team Leader on the Prince’s Trust Team programme was awarded the Excellence in Teaching Award sponsored by COES for delivering a fantastic experience to his students, inspiring them to take a positive next step in their lives. Jacob builds a great rapport with those he works with and his retention and engagement is always high, with the students having a fulfilling and rewarding experience. 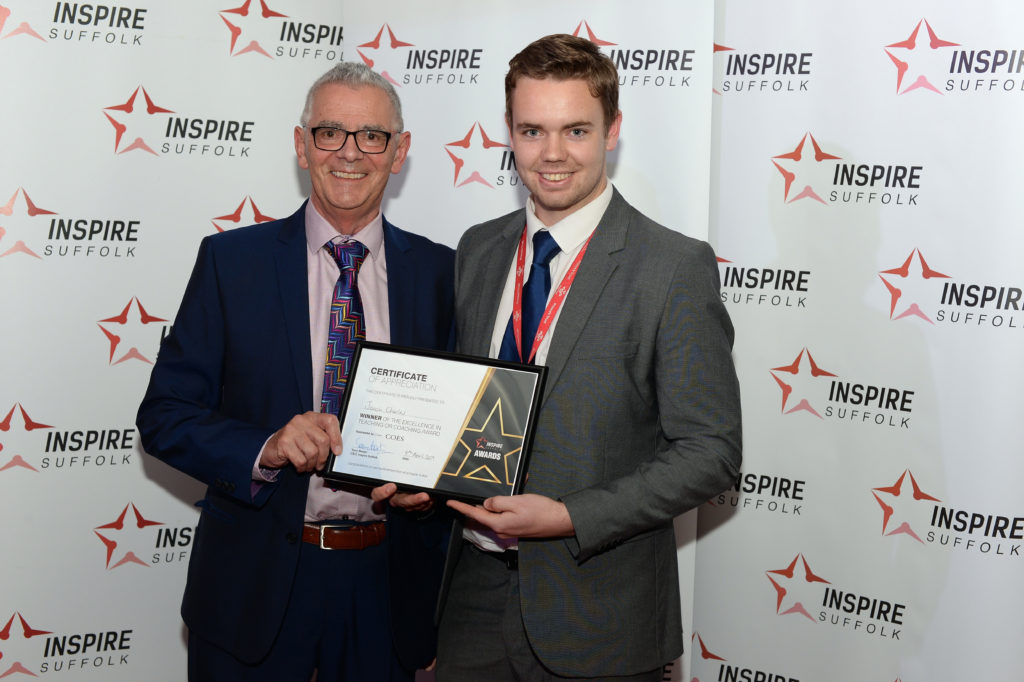 The final staff award was the Extra Mile Award sponsored by Hemisphere Freight which went to Rachel Reddington, CEO to the Chief Executive for always having the charity at the forefront of her mind. She consistently goes above and beyond supporting the aims of the charity and her colleagues for which she was recognised. 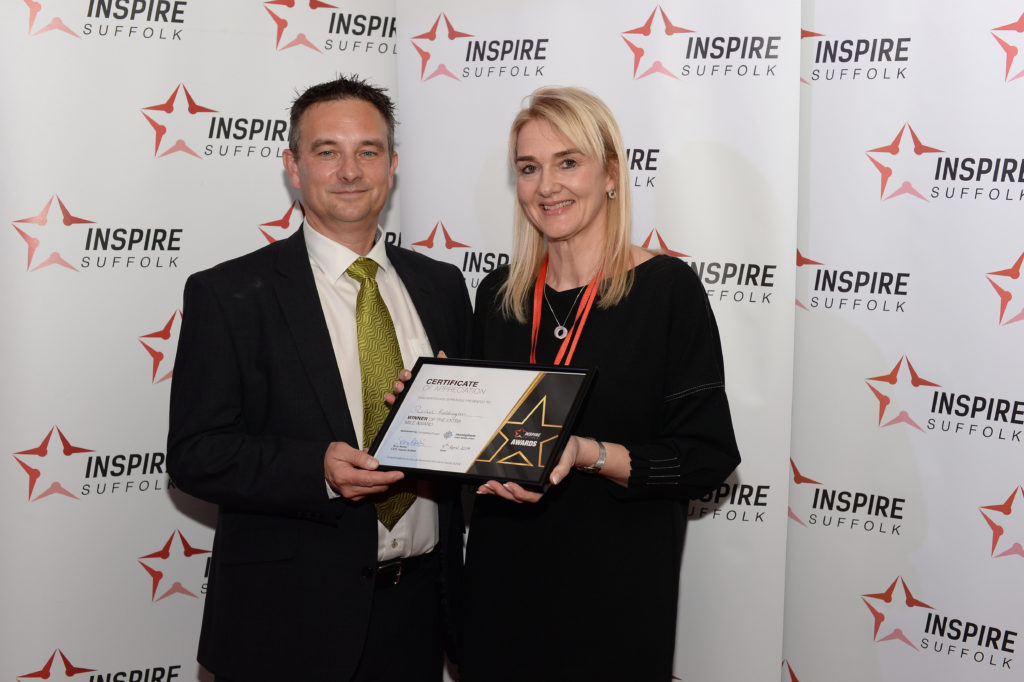 There were two final awards acknowledging the charity’s supporters and fundraisers. Simon Jay of Seckford Golf Club won the Fundraiser of the Year for his dedication in promoting charity events and raising over £2,500 at their Strictly Charity event, with Peter Dawes IFA and Ipswich School of Dancing shortlisted. 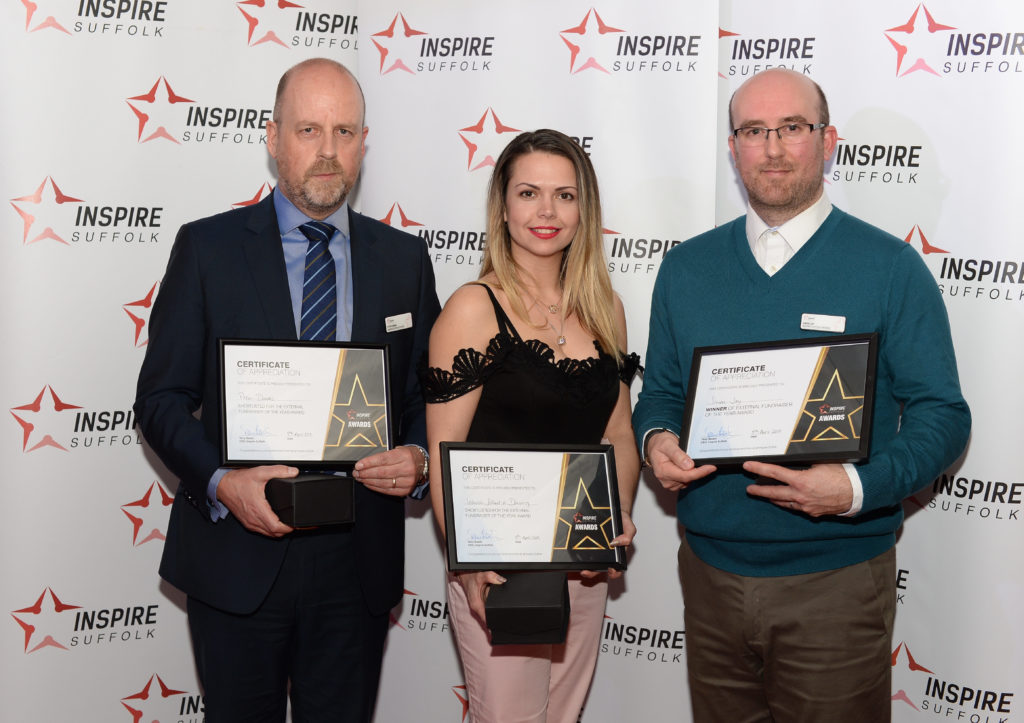 Andy Perrin of Hemisphere Freight was also recognised as Supporter of the Year for his commitment to Inspire over to past year including becoming an Inspire 30 Club member supporting the charity’s residential trips and a Patron.

Click here to find out more about what we do as a charity supporting young people onto a positive future.

Enquire about: Inspiring students and staff recognised at Inspire Awards